Today’s guest writer is Laura Maybrooke the author of Immortal Defiance. Laura Maybrooke is an 80s’ child, who works too much and writes too little. She lives in the land of the Midnight Sun and Polar Nights, together with her husband and daughter, and a cast of fantasy characters running around in her head. It’s busy here.

It is said you can’t write about what you don’t know. Well, while that’s not true, I don’t recommend doing it about subjects that are going to break your readers’ suspension of disbelief. Your readers’ willing suspension of disbelief is an important part of telling the story; if you cannot make them believe the world you’re creating, at some point, you are going to lose their interest in the story.

Don’t write about hero cops if you have no idea what police work is about. Don’t have your thriller taking place in a hospital if the only thing you know about them is that doctors wear a white coat.

Or if your medical thriller is the next Tess Gerritsen book, and you don’t know your ophthalmoscope from your otoscope, at least do yourself a favor and find someone who does. It is not uncommon to see writers inquiring after professional lawyers, doctors, nurses, and others qualified to check their work’s authenticity.

Read everything and whenever you can. If you don’t, you don’t know what’s good and what’s not. Writing is as much about reading as it is about writing. Reading a lot also extends your vocabulary, betters your use of different or tired story structures, and gives you plenty of examples of language to analyze.

You want to create real characters. The worst offense you can do is to create a perfect, flawless hero or heroine. Nobody wants to read that. Flaws make characters relatable and three dimensional.

Know your audience and your genre

You can never please everyone; that just doesn’t happen. Pick your genre and your audience and stick to them. Don’t make the mistake of alienating also the rest of your readers by offering them something else under the guise of another thing. Few people picking up a murder mystery will be pleased to find it turning into a Harlequin romance.

Your (creative writing) teacher probably told you that already in school. You better trust them, they know what they’re talking about.

I cannot stress that enough. Write, write, write. It doesn’t matter if it’s just a hundred words a day or a few thousand. The important thing is to keep writing. If you stop, starting again can be difficult.

It doesn’t matter if you think your story is rubbish. I’ll tell you a secret; it’s a rare writer whose first drafts are perfect. After you are done, revise and rewrite as many times as need be. There is no magic spell to make you an awesome writer without you putting any effort in it. Only by writing, can you get better.

My fantasy romance adventure book, Immortal Defiance, is my first published book, with two more books following in the series, and hence I, too, have recently walked the path of a new author and can say this advice is what I took away from the journey. 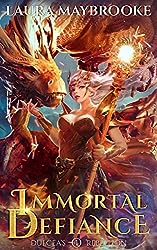 Things take a strange turn for Dulcea, the elven enchantress turned war heroine and Dragonmistress, when a countryman’s betrayal lands her in enemy hands.

As she awaits her execution, a stranger with mysterious powers offers her another chance at life. Will she die here or risk what sinister fate he has in store for her?

Can Dulcea reclaim her rightful place and lead her army once more? Or does Krath, the man who travels the Realm of the Dead as one of its own, prove to be the obstacle that fells her rebellion?

… Or will this immortal vampire warrior turn out to be the best chance she has of defying the ancient evil arising in the west?

2 thoughts on “Writing Advice for New Authors from Laura Maybrooke”