Karen A. Wyle was born a Connecticut Yankee, but moved every few years throughout her childhood and adolescence.  After college in California, law school in Massachusetts, and a mercifully short stint in a large San Francisco law firm, she moved to Los Angeles, where she met her now-husband, who hates L.A.  They eventually settled in Bloomington, Indiana, home of Indiana University. They have two wildly creative daughters.

Wyle’s voice is the product of almost five decades of reading both literary and genre fiction.  It is no doubt also influenced, although she hopes not fatally tainted, by her years of law practice.  Whether writing science fiction, afterlife fantasy, or historical romance, she tends to focus on the often-intertwined themes of individual identity, liberty, family, communication, unintended consequences, and the persistence of unfinished business. She has also published one nonfiction book, a resource for authors, law students, or anyone else interested in understanding more about American law.

Most of your books are science fiction, what made you decide to plunge into historical romance for your latest book?

I’ve been reading and admiring historical fiction for many years, though the thought of writing it intimidated me. Then, several years ago, I started reading historical romance, and occasionally contemporary romance, for relaxation. Both those activities must have prepared the ground for the idea that sprouted and eventually grew into What Heals the Heart.

Why Nebraska? Do you have a personal connection with the state?

I considered and researched quite a few states before choosing Nebraska. I wanted a state rather than a territory, but nothing so industrialized as, e.g., Ohio had become by 1874. Other factors included the presence of railroads, the type of agriculture prevalent, and the absence of active conflict between soldiers and Native American tribes.

How has being an attorney influenced or aided in your writing? Which is harder writing an amicus brief for the US Supreme Court or a historical romance? I know both take a great deal of knowledge and research.

First and foremost, studying and practicing law gave me what I think of as writing fluency. In college, I could barely crank out a three-page paper, literally banging my head on the wall (in the dorm hallway, for added drama) between paragraphs. During the summer after my first year of law school, I worked for a small law firm and was assigned an appellate brief to draft. I somehow managed to write it and enjoy writing it. Writing became relatively easy. When I turned to writing novels in November 2010, that ease stayed with me.

Decades of writing appellate briefs has no doubt helped to shape my literary style — though I hope I manage to write some characters whose voices are more direct and less convoluted than my own. I’ve also included legal themes and proceedings in three near-future novels.

I’ve written one amicus brief for the U.S. Supreme Court, and I’d say it was (for me — I don’t speak for other lawyers or authors) considerably more stressful than writing any of my novels has been. While I strive for accuracy in my fictional details, the worst I risk if I get something wrong is embarrassment and a diminished reputation among readers. Errors in a Supreme Court brief can have serious real world repercussions. One common factor, however, particularly with this book: I had a great deal of research assistance. Perhaps a dozen people with a deep personal interest in the Supreme Court case provided me with articles from psychological and sociological journals to cite in my brief. As for What Heals the Heart, my Acknowledgments page has a long list of those who answered my innumerable questions and steered me to original sources.

While the issue remains hotly disputed, it’s my view that we’re past the era where women had difficulty being accepted as, and celebrated as, authors of science fiction. My favorite female science fiction writers include, in no particular order: Ursula K. LeGuin; Mary Doria Russell (though after two splendid SF novels, she left SF behind for historical fiction); Elizabeth Moon (specializing in military SF); Lois McMaster Bujold (wonderful at fantasy as well); Vonda McIntyre; and Elizabeth Bear.

Out of all your books, who is your favorite character and why?

That’s a tough one! I’m not good at picking a favorite anything, let alone a favorite among my “babies.”

Dr. Mara Cadell, founder of the Twin-Bred project in the series of the same name, is definitely high on my list. So is the secondary character Judge Alexandra Rayner, who appears by name in Division and my upcoming near-future novel Donor, and (to be coy) may be the unnamed judge near the end of Playback Effect and throughout the second half of Who. I would like to be Judge Rayner when I grow up, so to speak. (I’ve toyed with writing a book with her as the main character, though I wouldn’t bet on it happening.) Arthur in Playback Effect is an honorable if flawed man, essentially a sweetheart. And Freida in What Heals the Heart owes a great deal to my extended family, particularly my parents’ and grandparents’ generations.

What is the one question you wish someone would ask but they haven’t and what would be your answer?

My memory isn’t reliable enough for me to be sure, but I don’t recall anyone asking me why my books would be good choices for book groups. I would answer that whether I’m writing science fiction, afterlife fantasy, or historical romance, my stories deal with themes that extend beyond genre. For example, besides addressing the “what if”s typical of science fiction, my near future novels explore the nature, boundaries, and mutability of individual identity. Wander Home addresses the human capacity for forgiveness and the need to confront unfinished business. The Twin-Bred series looks at the nature of family from various angles, as well as the role of secrets in people’s lives and the burdens involved in leadership. And What Heals the Heart deals with wartime trauma, the scars it leaves, and the possibility of healing, as well as the human tendency to view people as stereotypes and the surprises those people may have in store. 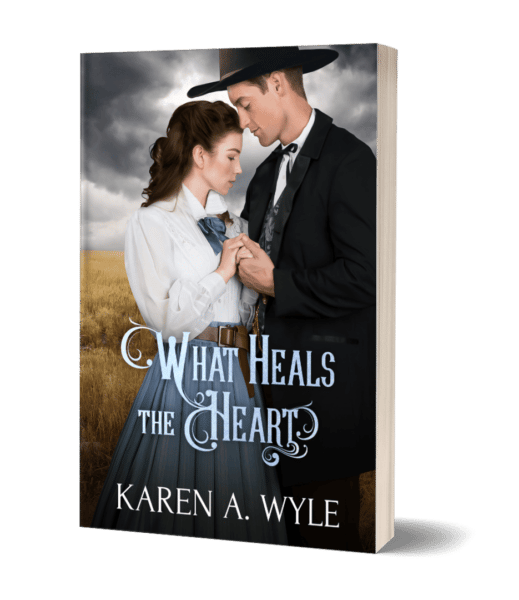 What Heals the Heart

by Karen A. Wyle

Joshua Gibbs survived the Civil War, building on his wartime experiences to become a small town doctor. And if he wakes from nightmares more often than he would like, only his dog Major is there to know it.

Then two newcomers arrive in Cowbird Creek: Clara Brook, a plain-speaking and yet enigmatic farmer’s daughter, and Freida Blum, an elderly Jewish widow from New York. Freida knows just what Joshua needs: a bride. But it shouldn’t be Clara Brook!

Joshua tries everything he can think of to discourage Freida’s efforts, including a wager: if he can find Freida a husband, she’ll stop trying to find him a wife. Will either matchmaker succeed? And is it Clara, a woman with her own scars, who can heal the doctor’s, troubled heart?

More Books By Karen A. Wyle

“Fellow attorney Karen A. Wyle has written the definitive legal reference book for authors….Utilizing [Wyle’s] book will insure that your writing is authentic.  As we all know, authenticity can make all the difference in how well your book is received by readers.  I urge you to pick up a copy for your reference library.” — author and attorney Robert Grant

“[This book] clarifies what lawyers actually do, gives warnings to writers, provides first-year law students and those contemplating a career in law an overview of the legal system, and serves as a reference and backbone for writing good literature. . . . [Wyle] explains a host of topics in an easy-to-read, easy-to-understand style. . . . I recommend [this book] for any adult living in the United States.” – McNeil Reviews

Can interspecies diplomacy begin in the womb?

“Now and then I read a really good book, and this is one of the best . . . Escaping from an over-crowded Earth, humans search for somewhere to live. . . They settle on Tofarn, which seems to fit all of their requirements – even the indigenous aliens appear happy to accept them. Trouble inevitably flares between the native Tofa and the human newcomers, mostly because of mutual ignorance. What is needed is a means of bringing the two communities closer . . . What follows is the story of a scientific attempt to produce that perfect solution; the setbacks and the successes, the joys and the unforeseen disasters. A happy ending? A hopeful one, definitely! I would love a sequel to this beautifully written, captivating novel. More please!” — Ellen Ghyll, author

Death is no longer the end. Those who prepare, and can afford it, may have their memories and personalities digitally preserved. The digitally stored population can interact with the world of the living, remaining part of their loved ones’ lives. They can even vote.