Today’s guest on Writers Talking is

author of What the Valley Knows.

Heather Christie grew up in rural Pennsylvania and, at age seventeen, took off for New York City in hopes of becoming a movie star. Flash forward several decades, a couple degrees, a bunch of cats, two kids and one husband later, she’s back in Pennsylvania writing her heart out and chasing dreams again. She loves to read, run, drink tea, and make Sunday dinner.

Do you come from a family of readers? Did you grow up with books in your house?

My father is an avid reader and for my sixteenth birthday, he gave me a bag full of his favorite books. Up until that point, I hadn’t been a huge reader, but something magical happened as I read the titles he’d handpicked for me. Since then, books have become an integral part of my life. My love of reading was the impetus for my undergraduate degree in Literary Studies and then, twenty year later, my MFA in Creative Writing.

If your book was turned into a movie what actors would you choose to play your main characters?

What advice would you like to give writers who are struggling with their first novels?

You need to be in it for the long haul. Nothing happens quickly in this business. The study of writing is intense and never finished. The path to publication can take years. You need to decide that writing is who you are and find a way to juggle your art with real life, i.e. how to earn a living and still devote consistent time to your writing, and then stick to it!

Who is your favorite and least favorite character in What the Valley Knows?

I love my MC, Molly, but my favorite character is Wade. He starts out a jerky jock but, by the end of the book, becomes a person capable of self-reflection with desires beyond sports. My least favorite character is the bad guy Peter Vitullo. My hope is that is obvious why I like him the least, but I don’t want to include any spoilers.

What’s the most difficult thing about writing characters of the opposite sex?

It’s tough to know how a male really thinks and feels. The challenge is to remove my female-filtering glasses and try to see the world from the opposite sex’s point-of-view. I grew up with two brothers close in age and I have a seventeen-year-old son, so I glean as much as I can from those relationships.

How do you select the names of your characters?

I have a difficult time with names and titles. For What the Valley Knows, I picked basic names (Molly, Wade, and Ann) as placeholders, thinking I’d change them later, but they stuck.

Are you a plotter or a pantser? Do you outline your books beforehand or just go with the flow?

For What the Valley Knows, I was definitely a pantser, not knowing where the story was going, working both forward and backward from the initial accident scene. As a result, the novel took six years to write. I am now working on my second book and I’ve taken a completely different approach, plotting and mapping the entire story first, and the writing is going much faster.

Are you a night owl or an early bird? When do you do your best writing?

Generally, I try to block a couple hours to write in the afternoons, after I’ve attended to my “real job” tasks as a real estate agent and before my “mommy” duties start in the evening. If I don’t have real estate appointments at night, I will often revisit what I wrote earlier in the day. My home office serves as my writing space, but I do keep a pen and notepad by my bedside for those middle of the night ideas.

What question do you wish that someone would ask about your book, but nobody has? And what would be your answer?

“Are you willing to accept a three-book, a huge advance deal for your next book and the rights to WHAT THE VALLEY KNOWS?” 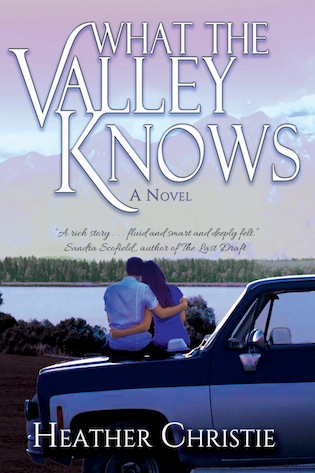 What The Valley Knows
Heather Christie

Millington Valley is a quintessential small Pennsylvania town: families go back generations. Football rules. Kids drink while adults look the other way. High school is a whirlwind of aspiration and rivalry, friendship and jealousy.

When smart and pretty Molly Hanover moves to town and attracts the attention of the football team’s hero, Wade Thornton—a nice guy with a bad drinking habit—longtime friendships are threatened and a popular cheerleader tries to turn the school against Molly.

The young couple’s future is shattered when Wade, drunk, wrecks his truck and Molly is thrown through the windshield. She wakes from a coma to find her beauty marred and her memory full of holes. As she struggles to heal, she becomes sure that something terrible happened before the accident. And there is somebody in the valley who doesn’t want her to remember.