Skip to Content
Home Life My Week Uplugged Not by Choice

I recently spent a little over a week snowed in with no television, no internet and only a burner phone with limited minutes and no data. I was almost completely cut off from the outside world. If you are not a regular follower on my social media, you may not know that I have PTSD and suffer from severe anxiety with panic attacks and bouts of agoraphobia. This makes me more dependent on the internet than some. Not having a car makes it worse. I do most of my shopping online even for the staples like pet food and groceries as going to the store is an ordeal of buses, cabs, walking, and dealing with crowds which even on a good day can be very daunting.

I schedule blog posts and some social media ahead of time so this may have made it seem like I was still on the internet. Those who follow my nightly #3things gratitude post on Twitter and people I regularly interact with on Facebook, Twitter and Instagram were concerned with my absence and reached out to check on me. Thank you for that. I am happy to know that I am missed by so many online friends.

Day 1 unplugged consisted mostly of trying to figure out what was up with the internet which caused me to use over half of the minutes I had available on that burner phone. I spent a great deal of time on hold and being transferred to people who were either not in or couldn’t help me in any way. It was a Friday, so of course, everyone had left early.

Day 2 and 3 we spent looking for DVD’s to watch and sorting through my TBR (to be read) and AR (already read) pile to figure out what to read. I don’t own a TV and use a tablet/laptop to watch television, I had to figure out if we had a laptop or computer that would even play Dvds. Being in an already heightened state due to the unexpected shut down of the internet, I was very near the edge of panic so I needed to have distractions. Not any distraction will do, it must not be something that adds to my anxiety. We found 3 dvds and I found a couple of books to read. I also started working on a very colorful floral poncho. A great way to use scraps. 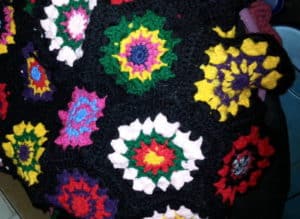 Day 4, my daughter was off work so she went to the library and checked out some dvds. We were surprised to find the new Wonder Woman movie. She got several movies and TV shows including the complete Young Pope series and the complete Munsters series.

Day 5 through 8 was spent doing all the stuff we did before the internet. Reading, watching movies, talking to friends on the phone, crafting, crocheting, and making jewelry.

Now that the internet is back on, I am finding it hard to find my old rhythm again. It will take me a few days to get back on schedule but I think I am making a new schedule or at least adjusting my old schedule to limit my social media time. I didn’t miss all that crazy news of the world that we are inundated with on social media. Especially politics which makes everything seem like an emergency 24/7.  It really is a big time suck. So I think one thing I am going to change is that I am going to get everything else done including the fun stuff and then if there is time I will waste it on scrolling through my feeds.

Could you survive being unplugged?

What would change in your life?

Wondering what books I read while unplugged?