H is for Human Rights Day 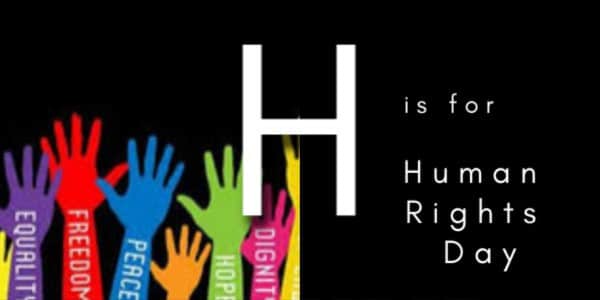 What is Human Rights Day?

Human Rights Day is celebrated globally on December 10th. It commemorates the day in 1948 the United Nations General Assembly adopted the Universal Declaration of Human Rights.

The Commission on Human Rights was made up of 18 members from various political, cultural and religious backgrounds. Eleanor Roosevelt, widow of American President Franklin D. Roosevelt, chaired the UDHR drafting committee. With her were René Cassin of France, who composed the first draft of the Declaration, the Committee Rapporteur Charles Malik of Lebanon, Vice-Chairman Peng Chung Chang of China, and John Humphrey of Canada, Director of the UN’s Human Rights Division, who prepared the Declaration’s blueprint. But Mrs. Roosevelt was recognized as the driving force for the Declaration’s adoption. UN

The Universal Declaration of Human Rights