Origin of the Grilled Cheese Sandwich

There have been recipes that included melting cheese on bread since ancient times but the idea of a grilled cheese can be traced back to the 192o’s when Otto Frederick Rohwedder invented the bread slicer and processed cheese was patented by James L. Kraft making cheese affordable and scalable for the masses.

During World War II Navy cooks prepared “American cheese filling sandwiches” as instructed in the government-issued cookbooks.  In 1949, Kraft Foods introduced Kraft Singles and supermarkets began stocking them in 1965.  This is also around the time that the sandwich got it’s second slice of bread on top making it a more filling sandwich.  Thus the modern grilled cheeses sandwich was created. 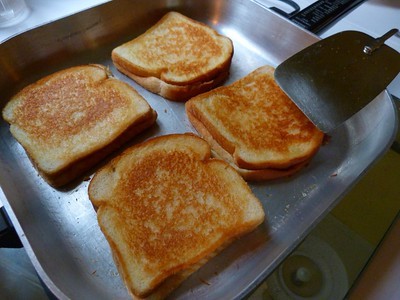 Three-quarters of people who buy sliced cheese make at least one grilled cheese a month.

In the 1953 version of  The Joy of Cooking, Irma S. Rombauer wrote that bread and cheese should be heated in a waffle iron as an easy meal that even “the maidless host” could prepare.

The term “grilled cheese” doesn’t appear in print until the 1960s; before then it was referred to as toasted cheese or a melted cheese sandwich.

A 1902 recipe for a “Melted Cheese,” designed to be cooked in a hot oven, appeared in Sarah Tyson Rorer‘s Mrs. Rorer’s New Cook Book

The most expensive grilled cheese in the world is the $214 “Quintessential Grilled Cheese” from Serendipity 3 in New York City.

Here’s my family recipe for a simple grilled cheese.

This is a quick and easy go to for my family for a quick lunch or paired with chili for a hearty meal.

The great thing about a grilled cheese is you can substitute whatever bread or cheese you like or even add different types of cheese and bacon. It's up to you how fancy or how simple you want your grilled cheese to be.

Want some more great grilled cheese recipes from all over the world?