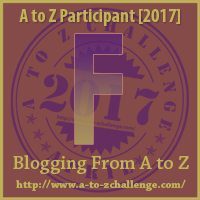 Natalie Stewart, a slam champion and a founding member of the performance poetry group 3 Plus 1 which was rising to critical acclaim throughout London, Birmingham, and Manchester, invited Marsha Ambrosius to join her on stage to perform at a spoken word night, where they debuted a piece called Fantasize. Floetry was born.

(2003). They received 7 Grammy nominations, a Mercury Prize nomination, and 3 Soul Train awards in the brief time they were together.

Click here to see all my A to Z Challenge posts