I could read by the time I was three, and the first thing I read was a volume of nursery rhymes from my Childcraft Encyclopedia set.

I remember sitting on the dining room floor in front of the bookshelf and the words just clicked. The symbols on the page under the picture, the symbols like the ones in the newspaper that my Grandfather read to me as I sat on his lap every day, they made sense. The squiggles and the dots, like the ones my Grandmother taught me on the chalkboard.

The lines that spelled my name spelled other names, other things, other words. I understood the words. I could read, even without the pictures. I could read!

On that day sitting on the cooler hardwood floor near the bookshelf, a reader was born. The first chapter book I ever finished on my own was Miss Hickory, and then I went on to read Katie Kittenheart, the Secret Garden, all the Trixie Beldon series, and everything else I could get my hands on.

Whenever I had a question about anything my Grandfather would always pull out the World Book Encyclopedia and we would look it up together. thus, I learned how to find information for myself and then I discovered the public library, my second home.

When I was around twelve years old, I discovered my love for poetry.  Emily Dickinson spoke to my preteen romantic soul. I began to devour the classics.

Then one day as I sat on the floor between the stacks in the poetry section, I discovered my soul.  She was not classical or romantic but she was speaking her truth, my truth, The Truth. Nikki Giovanni gave words to my reality like no other poetry had ever been able to before. She was real, not some romantic figure locked in her room dreaming of love. She was living life and talking about what it meant to live life as a woman.

She was writing all those thoughts that were swirling around my head that up until that moment I had no idea was poetry. Wearing cut-off shorts and a tube top, sitting on that rough industrial carpet that made my legs itch, enjoying the coolness of the air conditioning on that hot summer day in 1970 something, I discovered my poet’s soul and her name was Nikki.

This April marks the 20th anniversary of National Poetry Month, which was inaugurated by the Academy of American Poets in 1996. Over the years, National Poetry Month has become the largest literary celebration in the world with schools, publishers, libraries, booksellers, and poets celebrating poetry’s vital place in our culture.

This is the Dickinson poem that is still etched in my romantic, adolescent, lovelorn heart. Yes, I was a very melodramatic adolescent but weren’t we all?  Enjoy!

If you were coming in the fall

If you were coming in the Fall,
I’d brush the Summer by
With half a smile, and half a spurn,
As Housewives do, a Fly.

If I could see you in a year,
I’d wind the months in balls—
And put them each in separate Drawers, 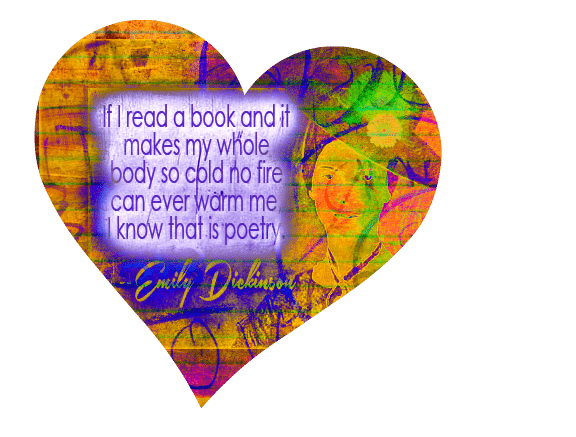 For fear the numbers fuse—

If only Centuries, delayed,
I’d count them on my Hand,
Subtracting, til my fingers dropped
Into Van Dieman’s Land,

If certain, when this life was out—
That yours and mine, should be
I’d toss it yonder, like a Rind,
And take Eternity—

But, now, uncertain of the length
Of this, that is between,
It goads me, like the Goblin Bee—
That will not state— its sting.

What poet first spoke to your soul? Tell me in the comments or share one of your favorite poems.