Anthony Bourdain Saw the Heart of Appalachia and Understood It

The news of Anthony Bourdain has hit me like a ton of bricks.  He was a survivor a person who had walked through hell and returned to give us his take.  He was the friend you really wanted to travel the world with because you knew you would meet the most fascinating people and eat the best food.  To me, Anthony Bourdain was real, not pretentious, not ‘celebrity’ but a person with opinions and experiences who lived life to the fullest and always strayed from the beaten path. He was here in my state recently and unlike many other’s he did not see us as stereotypes but as people who cared for each other no matter how hard times got. 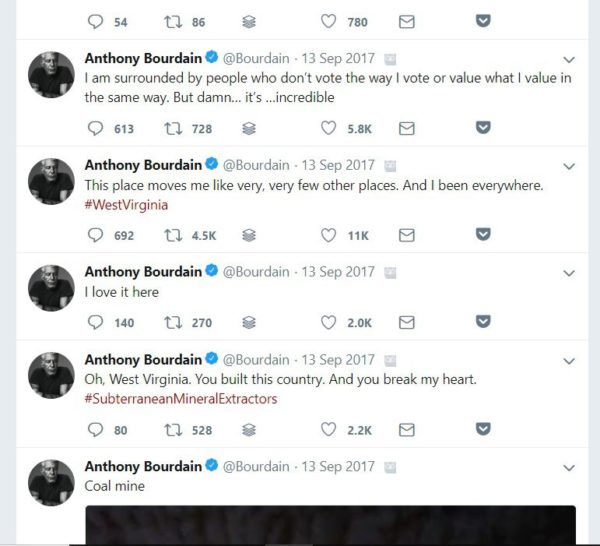 Anthony Boudain understood us like no outsider has. He saw the hearts and souls of the people of West Virginia. This world is a little less bright today for me as I mourn a friend I never actually met.

Instead of coming in to offer advice, Bourdain instead prefers to listen. “I would never in my life dare, as a New Yorker, give advice to West Virginians. That’s what everybody’s been doing for 200 years and I don’t want to be that guy,” said Bourdain in the garden area of the Count Gilu Motel in Welch.

Bourdain spoke about his first trip to the Mountain State to undergo HET (Hostile Environment Training) to get ready for filming an episode in Iraq. “Running around in the woods, learning first aid, how to deal with a potential hostage situation, stuff like that.”

Gazing around at the mountains as he smoked a cigarette, Anthony said, “It’s immediately apparent that it’s beautiful country. I’ve traveled a lot over the past few years to parts of America I didn’t think I’d like so much, but because of that I reached an expectation that I’m probably going to have a lot of fun in West Virginia; that I’m probably going to get along really well with the people there. I was also aware of the dismissive attitude.”

Bourdain doesn’t like to be in a room where everyone agrees with him. “If you look at social media, particularly after the election, the way people talk about West Virginia, the way it is generally portrayed in the press, even by people who are sympathetic, I don’t like that.”

The mission of the show was to do the opposite. “I thought, ‘I want to be the guy to go down and make West Virginia look awesome,’” said Bourdain. “Because it’s got to be. Let’s do a show that’s different than everyone else’s show.”

Bourdain said he didn’t want to do the poverty tour, instead he was far more interested in why people stay. “There’s a reason people are so proud here, why they have stayed despite the difficulties. Let’s go look at that,” said Bourdain. “From the planning of the show, the mission was to go find the things that keep West Virginians here, that make them love the place, and look at coal from a coal miner’s point of view, because clearly everything people say about coal is bull**** from the left and the right.”

Touching upon the political divide, Bourdain has problems with both sides’ handling of West Virginia. “I’m very aware that Democrats tend to see West Virginia as a lost cause, and culturally as existential enemies who are never going to vote with them, anymore anyway,” said Bourdain. “And Republicans, in my view, take it for granted. All they’ve got to do is step off the plane, say a few words, ‘Hey, we’re going to bring coal back,’ and get back on the plane.”

“People here know what they’ve got. It’s a rare and beautiful thing. I’ve never been in a room with six or seven people who traveled so little and were not particularly interested in going any place.” — Anthony Bourdain

Bourdain wonders if anyone has a real sense of what it’s like here. “My job is I come down and ask a lot of stupid questions. Deliberately stupid questions, because I’m trying to get a smart answer and what people have been saying has been amazing, really heartfelt, heartbreaking, beautiful things.”

Bourdain said he heard people in McDowell county take care of each other, live a certain way, believe certain things, and that he had seen it with his own eyes, particularly at Friday night’s Mount View Homecoming game. “I was surprised by the racial ethnic makeup of the community that came together for the football game last night. I was surprised by the interracial couples, the easy familiarity and affection between people that is very different than in New York.” said Bourdain. “ We like to think of ourselves as this island of tolerance and forward thinking but we don’t know our neighbors that way. We talk a good game but we don’t really know each other and that kind of put us to shame.”

Bourdain also recognized that instinctive closeness to nature, the way some people here see the mountains as a source of food, always in the fallback position. He also saw that the roots of the coal industry have read more