What is a Micro-Influencer?

Mega-influencers are often A list and B list celebrities with millions of followers and they command the highest payments to be shown with a product. They are often household names such as Kim Kardashian.  In 2019 Kylie Jenner was the highest-paid social media influencer with her Instagram garnering 1 million dollars or more per post. These influencers work with huge marketing teams and agents to promote products and seek sponsors.

Macro-Influencers have somewhere between 100,000 to 1+ million followers. They make 100’s of thousands per post. They are often niche celebrities who gained fame through the internet with Instagram, TikTok, or Youtube. They are ‘celebrities’ that are famous for being on social media. Such as Tana Mongeau who has millions of followers but the average person over 30 does not know who they are. These influencers often have agents and marketing teams that handle their social media as well as sponsorships.

Micro-Influencers have between 10 thousand and 100,000 followers. These influencers can make anywhere from $100 to a few thousand dollars a post depending on followers, engagement, and deliverables. Micro-influencers often personally interact with their followers on a daily basis.  Examples of these are bloggers, travel vloggers, and home chefs. Everyday people who also have a following on social media.

Nano-Influencers have less than 10,000 followers or are members of a very specific and often local niche.  They often view social media as a way to disseminate information and to stay in touch with their followers. Specific industries, locales, or populations follow them. A restaurant, a beauty consultant, or a local newspaper could fall into this category.

Please note, not everyone on social media considers themselves an influencer or is paid to promote products or ads. You might have a million followers but not accept payment from sponsors or you may have 1,000 followers and only post sponsored ads.

Now that we have an understanding of what is meant by a micro-influencers, let’s delve right into why you should hire one to grow your business as opposed to investing in a mega or macro influencer.

Studies have shown that once an influencer reaches a critical mass of followers, engagement decreases.  Mediahub, found that using micro-influencers increased engagement rates upwards of 50%.  Mega and macro-influencers usually have more likes on a post but likes do not always translate into sales. Likes are often just a show of support or actually just liking the photo aesthetics or location.

Likes are often done without much thought as we scroll through the feed. Actual engagement, the stopping and really looking at or reading the post, writing comments, entering contests, clicking on links that drive sales mean more than a passing like.  Micro-influencers have more actual engagement, 60% more than mega or macro-influencers because their audience can easily relate to the content and with the influencer on a daily basis.

More engagement equals more traffic to your site and more sales of your product or service.

Micro-influencers are often considered more trustworthy than macro and mega influencers.  Micro-influencers often have built a place in a specific niche and their followers consider them somewhat of an expert and trust their opinions. For example, my niche is women over 40, so my followers know that if I recommend something, I have tried it myself and am sharing my true experience and feelings about the product as a woman over 40.

Companies that hired influences had an average earned media value of $5.78 per dollar invested in influencer marketing 2019. 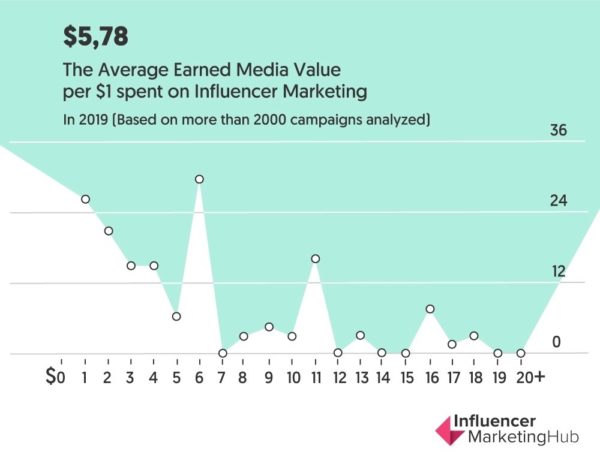 If you have a fixed marketing budget it only makes sense to spend that money on as many influencers as possible that you know will drive traffic to your product. You could purchase one Instagram post for $100,000 from a macro-influencer or you could spend that same amount of money to hire 10 micro-influencers for an entire social media campaign that might include a blog, Facebook, Instagram, and Twitter post for one price.

Most micro-influencers are open to negotiation when working directly with a brand. 84% of micro-influencers charge less than $250 per post and most charge $500 or less for an entire campaign that includes multiple posts across platforms. Some micro and nano-influencers will create campaigns in exchange for products or product and reduced fees.

Another ROI that is immeasurable is the viral factor.  Influencer posts are usually left up in perpetuity (as specified in most contracts) which means at anytime the post can be shared, trend, or go viral.  Influencer campaigns have an extremely long shelf life.  A post sponsored by a hot dog brand that includes a recipe for the 4th of July has the potential to trend every 4th of July or at least be rediscovered year after year.

Micro-influencers usually only promote companies and products they have used and believe in.  They can be very brand loyal promoting products they use even when not being compensated. This can also be advantageous to companies who would like to form a long term partnership or are looking for ambassadors.

I, for one, like to tag restaurants, stores, and products in my Instagram posts just so my followers know where they can find what I’m wearing, eating, or using. For me, it’s more about sharing with my followers and helping them discover things they may like. If one of these companies approached me and asked for a partnership for a year in return for compensation, I would be very open to that.

For an investment in a micro-influencer, you could get a year’s worth of advertising for less than the price of one Instagram post from a mega-influencer. Your company will get someone who is already brand loyal with followers that will become brand loyal. Depending on the negotiations you could get ads placed in a weekly newsletter sent to followers, monthly blog or Instagram posts featuring the product line, weekly tweets and Facebook posts, a few product giveaways and inclusion in a holiday gift guide, not to mention all the word of mouth.

Many mega-influencers are well known on one platform. They may have 500,000 followers on Instagram but no email list or blog presence. Most micro-influencers have a presence on multiple platforms.  They may have 500,000 followers spread out over Instagram, Twitter, Pinterest, and their blog email list.  By hiring a micro-influencer you can often have a larger reach even if the numbers are smaller.

As we know, different people use different social media platforms, many micro-influencers are also bloggers who utilize all the social platforms to get their blog posts out.  This leads to many loyal followers on multiple platforms who seek out our opinion in the niche we write in.  This way people who don’t use Facebook can still be reached on Twitter and people who don’t use Twitter can still be reached on Instagram.  As micro-influencers it is in our best interest to build followers on all the social media platforms to reach more people who can become readers of our blogs.

What this means for your company is micro-influencers come with a ready-built following across multiple platforms made up of multiple ages, geographic locations, and socio-economic backgrounds. People who are your potential new customers.  People who are waiting to learn about your product from someone they trust.

Hiring a micro-influencer to run a multi-platform campaign means your product gets seen by numerous people not just Instagram followers with an average age of 25 that are only interested in what fast fashion is trending today to be forgotten about tomorrow.  The median age of Twitter users is 40 and Twitter users are shown to spend 26% more time with ads than other social media platforms and 24% more time with ads created by influencers. The majority of Pinterest users have an income above $75,000 which means they have more disposable income. Shopping is a priority of 48% of people on Pinterest as opposed to 14% on Facebook and 10% on Instagram.  Don’t you want a social media campaign that covers more than just Instagram? Micro-influencers can do just that.

Are you interested in becoming an influencer yourself? I have found Instagram to be one of the easiest to create a following large enough to become an influencer in a short amount of time. You might want to start there and if you’re stumped for a name check out this instagram name generator for some ideas. Naming is a lot more important than most people think it is because that’s essentially your brand and good branding is one of the tricks that can really make you succeed. Read my article on marketing your brand before you begin to learn all the ins and outs. 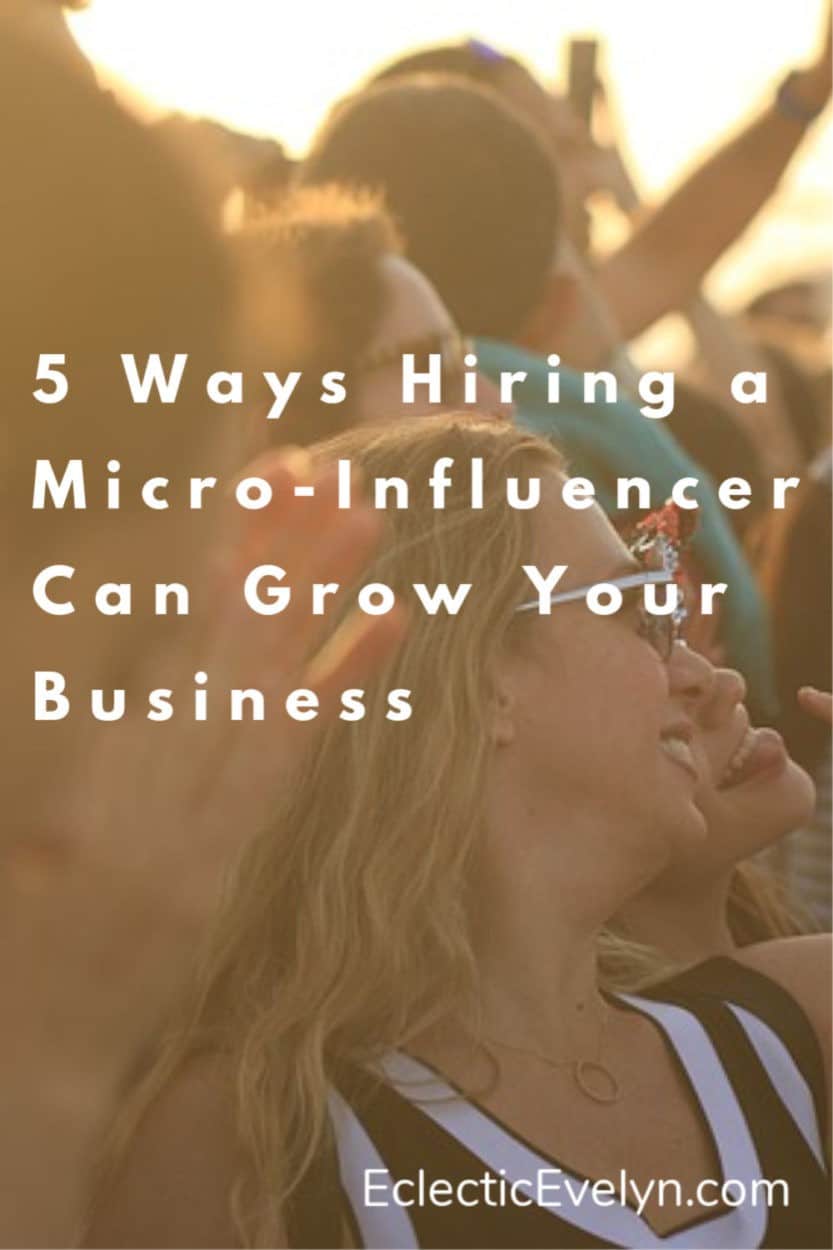 If you are interested in working with Eclectic Evelyn (a micro-influencer) please visit our Work with Us Page to find out how we can help your business reach the most people.